Senke Jissoku is a now well-recognized name of a group of 10 multi-generation famlies that have a closely working relationship with the 3 (san) Senke families that trace their lineage directly to Sen no Rikyu: Mushakouji Senke, Ura Senke and Omote Senke. While there are many other craftspeople whose work has long or even more recently been patronized by these tast-makers, as well as other chanoyu lineages that have patronized the craftspeople, these 10 are formally afforded a special relationship as a group in formal ceremonies and death anniversaries of past Senke grandmasters. The number of craftsmen (usually male lineages) used to vary depending on the family branch, but this distinction came about as a result of a group exhibition staged by and at the Mitsukoshi Department Store branch in Osaka in the Meiji period (1919). 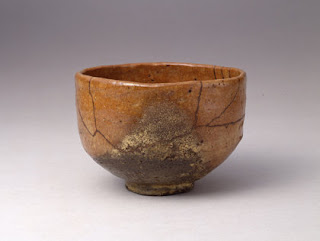 (Interesting that this blog did not have a short paragraph about Raku. This is from the 2016 catalog from the Raku Museum.)

Raku is one of many low-fired ceramic traditions around the world. It has its roots in Ming dynasty three-colored sosansai) wares from Fujian province in China. The tea bowls fashioned by a potter named Chojiro during the Azuchi-Momoyama period in the last 16th century marked the dawn of Raku Ware. There exists little or not detailed documentation of the relationship between Chojiro and Rikyu; however, Chojiro’s independent creative spirit has been preserved thereaafter throughout generations and centuries of the Raku famly. Each new generation has developed his own distinct style, who;e at the same time honoring the timeless traditions and knowledge handed down from father to son for over 430 years.” The current head of the family is the 15th generation. His son Raku Atsundo is quite productive. 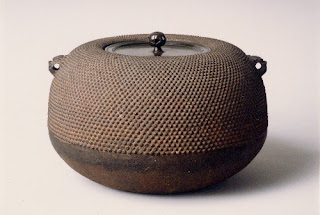